I grew up thinking that Boba Fett, galactic bounty hunter from the Star Wars Saga, was one of the biggest badasses of them all. He was the strong, silent type. He captured Han Solo. And he was the coolest dresser.

Look at that second item again. Did he really capture Han Solo? No. He followed him. He narced on him to the government. Then he took credit for his capture when he collected his money from Jabba the Hutt. However, it was Darth Vader that would ultimately capture Han Solo and hand him over to the bounty hunter. He fired his weapon once and missed. He couldn't even be bothered to chase after the person at whom he was shooting. What if it was another bounty hunter trying to take credit for his…er, Darth Vader's, hard work. So, he was lazy as well as a lousy shot. He couldn't even load his own cargo into his ship, the damn thing floated and it didn't look like those Bespin guards were struggling. Hell, his downfall was even worse.

The next time we catch up with Boba Fett, he's hanging out in what amounts to a good ol' boys club in the backwoods of the galaxy. Hell, Princess Leia was more badass than him when bargaining over Chewbacca. She pulled out a grenade and threatened to kill everyone and die in the process. Oh, but Boba Fett pulled his gun. What are you gonna do, Fett, shoot that little monkey thing? Were you even around when Luke Skywalker entered or were you still sleeping? On a side note: Jabba's palace was a sausage party. There were two females in the whole joint and neither were much to look at.

Oh look, Boba Fett reveals that he can fly. He also reveals that he has a bunch of other toys in his arsenal. He ties up the only guy with the light saber with a piece of string that can easily be cut. Luke only acts like he's detained to get Fett to let his guard down. While he's distracted, Han Solo hits his backpack with a long rod and launches him into the Sar'laac Pit. While he's down there, he can listen to stories of everyone else got there. Thrown in by the Jedi Knight, an explosion caused another to fall, another was thrown in by the only black guy in the trilogy. Finally Boba Fett can tell his story, "I was knocked in my defective backpack by a blind guy with a stick who had been in a coma for a few years." When the laughter subsides, he can get on with being digested for a thousand years. Frankly, if it came down to choosing someone to have my back in a fight, I'll take an Ewok or two.
Posted by AlienCG at 9:36 PM No comments: 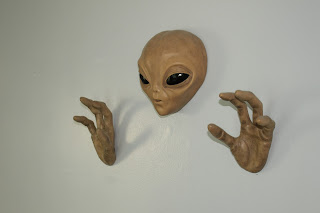 So yesterday (December 1) I decided to transfer this domain name over to Google Domains since the ISC domain is already there, my blogs are all on Blogger (a Google company), and I am an admin on three other domains. It was a minor formality, but something hit me. In March 2019, I would have owned the aliencg.com domain for 15 years. That means that the AlienCG name that I use online is already more than 15 years old. That name came about in June 2003 when a few friends and me decided to start a video game forum called The Game Board.

I was looking for a new online alias because in 2004, you didn't reveal your personal details online. I was always obsessed with aliens and UFOs, so I was looking for an alien-related alias. I had already used Alien Underground and Alien Overground, so I wanted something new. My friend, Mitch (aka Golden Boy/Amorphous Blob on The Game Board), said, "Why not Alien Coffeeground," at which I laughed, and soon decided that it was perfect. Due to a slight over-saturation of video game related forums out there, I decided to shutter the account and sold the domain name (big mistake since over the past couple years, I could have sold it for a lot more than $50).

I enjoyed having a website and I had learned a lot about PHP/SQL development, so I looked for and bought aliencg.com in March of 2004 as a personal website and blog that I called Alien's Planet. I still have the original code and some slightly broken iterations can be found on The Wayback Machine at archive.org. After many frustrations with shared hosting sites, I moved to the free WordPress service and renamed the blog Swamp Gas & Moonlit Reflections after having a renaming contest, and starting fresh (I did save the XML files from the old site). Eventually I moved to Squarespace where I had also started the SGMR Podcast (a personal podcast) and then to Blogger to save money. I shortened the name to SGMR and now host the podcast at archive.org.
Posted by AlienCG at 10:42 AM No comments:

Email ThisBlogThis!Share to TwitterShare to FacebookShare to Pinterest
Labels: aliencg.com, all about me, history, The Game Board, websites
Newer Posts Older Posts Home
Subscribe to: Posts (Atom)